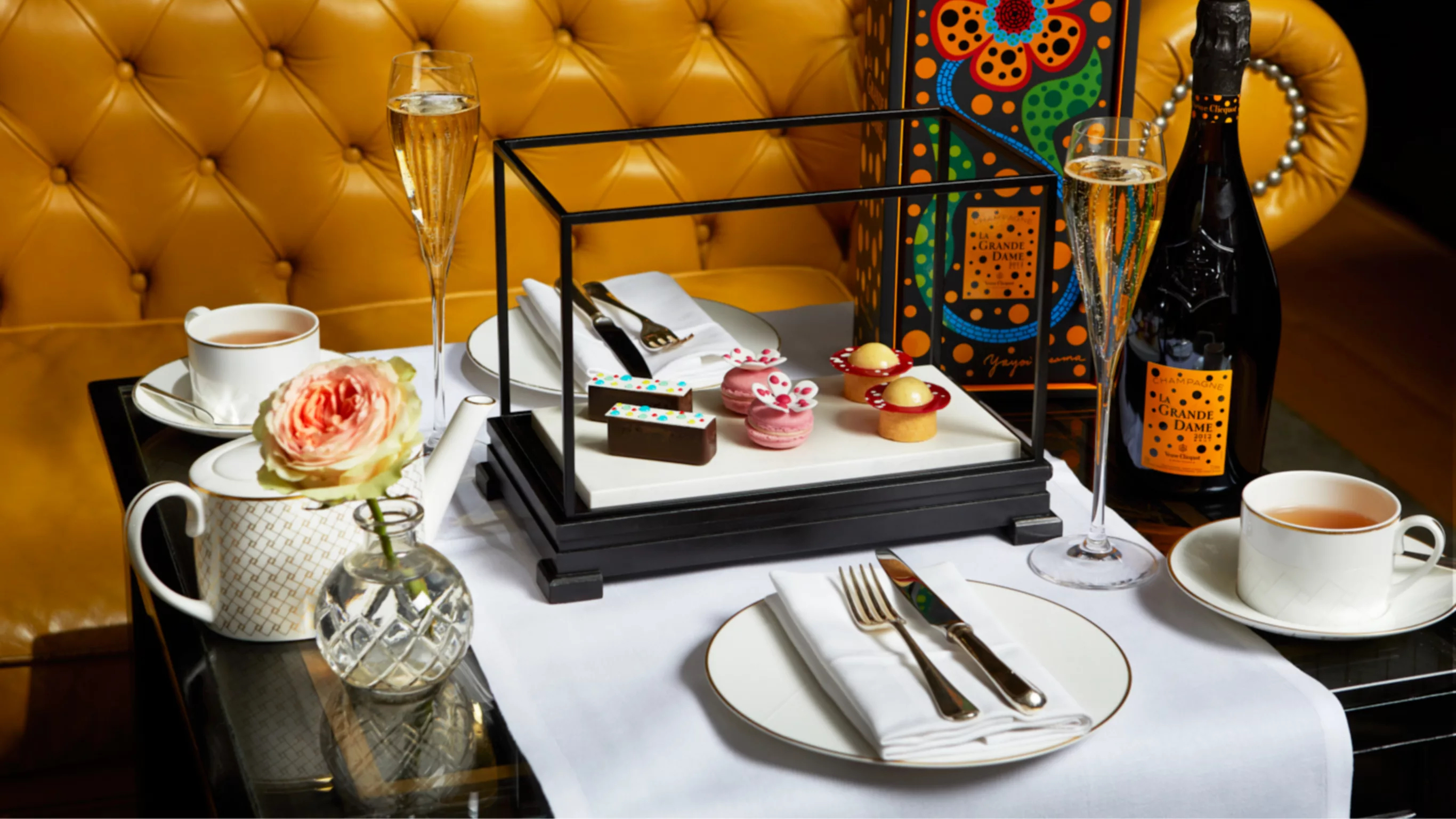 There are some incredible afternoon teas in London, but how do you choose which one to book and spend your money on?

Instead of me saying “THIS is the one to do”, I took my production team and visited some of the top tea experiences around the city so we could compare them for you, and you can decide for yourself which one to go for.

Watch the video below to see the comparison, or keep reading to get a rundown of all three afternoon teas in London.

While Fortnum & Mason serves a few variations on afternoon tea, they do one of the most classic and traditional teas in the city, and the setting of the Diamond Jubilee Tea Salon makes the whole experience feel extra British. The salon was named in honour of Her Majesty the Queen in 2012, when she formally opened the room for F&M, alongside the Duchess of Cornwall and the Duchess of Cambridge.

You couldn’t get any more central than Fortnum & Mason, being smack dab between Green Park and Piccadilly Circus, and there’s something about having tea surrounded by the famous Fortnum & Mason teal (it’s actually called Eau de Nil) from the decor to the furniture to the tea ware.

I went for the Vegetarian Afternoon Tea (£62.50) and a Glass of Fortnum’s Blanc de Blancs (£14.75). Because we were filming, Fortnum comped us everything but our total with service would have been £86.90 for one person.

Staff were very friendly and helpful right from when I arrived at the check-in desk, and everything else was top-notch, down to how quickly the champagne was delivered after I ordered.

You get everything you expect from a classic afternoon tea, from the pot of tea to the scones with jam and cream, and a selection of finger sandwiches and sweet treats. And of course they’re all stacked high on the traditional afternoon tea stand.

The afternoon tea experience at Fortnum & Mason is great for anyone who wants the classic, traditional experience in a beautifully British setting.  So if it’s your first time in London then you might want to book in for tea here.

Find out more about afternoon tea at Fortnum & Mason. 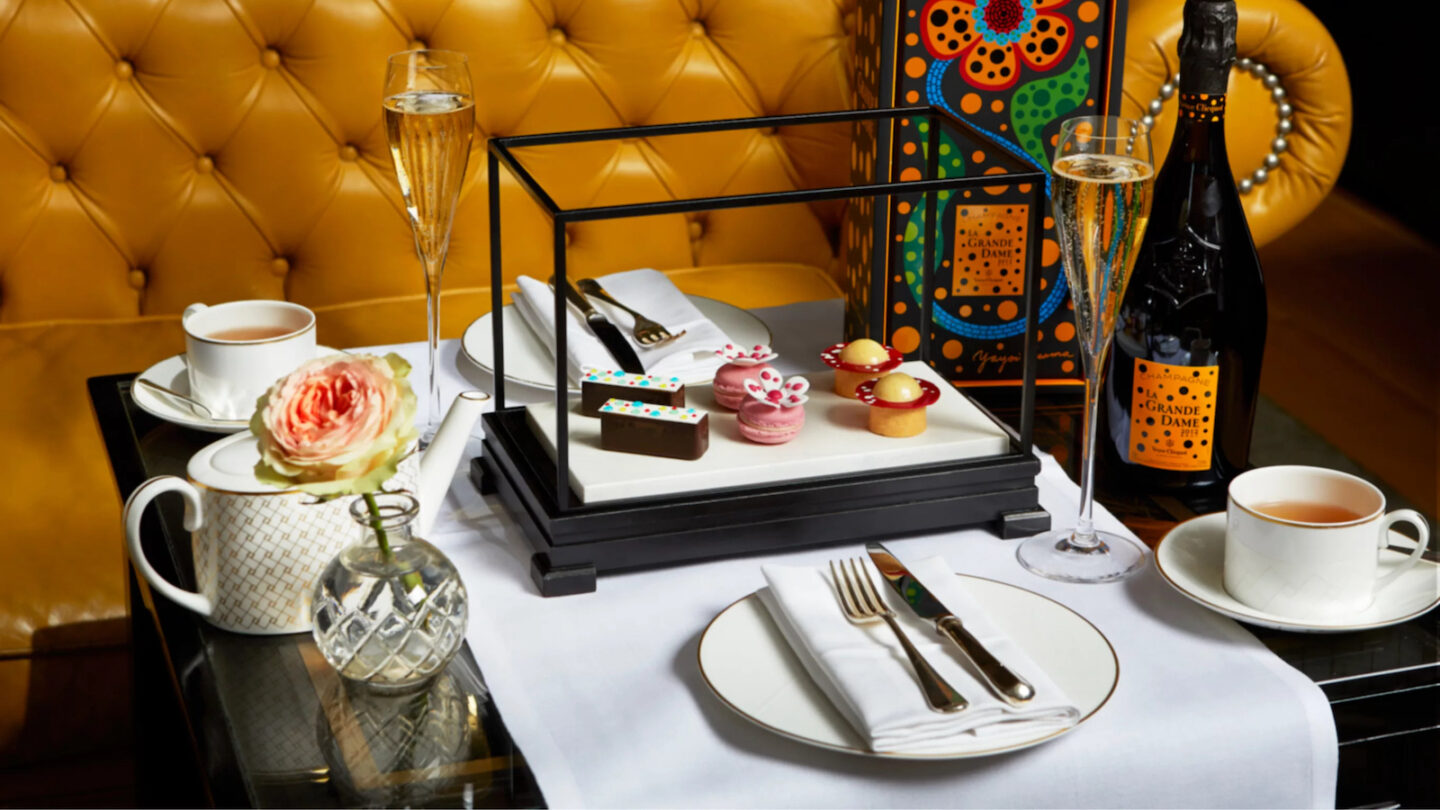 Image Courtesy of The Rosewood Hotel

The tea, served in the hotel’s Mirror Room, is typically presented as an Art Afternoon Tea, with the pastries inspired by a specific artist or certain artworks. When we visited, they were hosting a special Yayoi Kusama Art Afternoon Tea, inspired by Kusama’s current exhibition at the Tate Modern as well as her other signature works, like her famous polka-dotted pumpkins.

Located a few minutes’ walk from Holborn station, the Rosewood is centrally located, not far from popular tourists spots like Covent Garden and Soho. It’s also a bus ride away from areas like the design district of Clerkenwell and hipster-filled Shoreditch.

I had the tea, a glass of R de Ruinart champagne, and two bottles of water, and with service charge the total for one was £99. The champagne tea alone costs £75 before service charge.

On this particular day, the service reflected what you would expect from a Rosewood hotel. Servers were attentive and very knowledgable, especially when it came to giving a recommendation for what teas to have with each course of the experience. They also were adamant on warming up my scones after I let them go cold.

The stars of the show for this tea are of course the pastries, which as like tiny works of art, almost too pretty to cut into. The savoury course was as expected, and the scones were as well.

The tea selection is impressive at the Rosewood, as it’s sourced from French tea company Mariage Frères which has been around since 1854. As mentioned, if you’re not sure which teas will pair well with what you’ll be eating, the servers can make an educated suggestion to you.

The Art Afternoon Tea at the Rosewood Hotel is one to consider if you aren’t quite into the traditional afternoon tea vibes but still want an elegant and classy experience. Of course, if you are an art aficionado this tea is made for you. And finally if the sweet treats are your favourite part of the afternoon tea experience, the Rosewood have massively delivered on that part.

Find out more about the afternoon tea at the Rosewood Hotel. 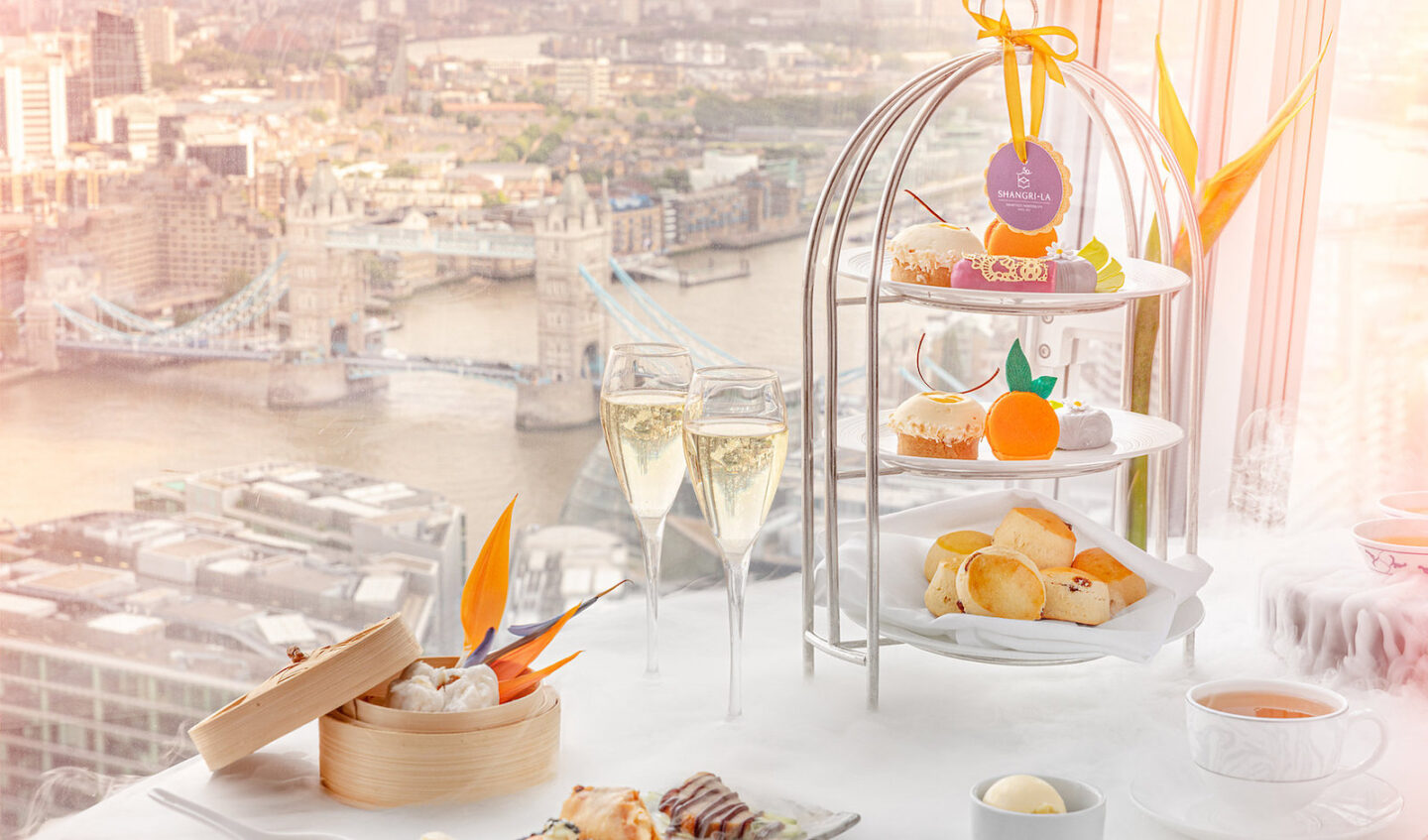 This tea is served in the Shangri-La hotel’s restaurant Ting, which does modern British cuisine with Asian influences and signature dishes. When we visited, they were doing the limited-edition Cloud Forest Afternoon Tea, but the tea’s theme changes depending on the theme that’s around the hotel at that time. For example, the next tea offering will be pink-themed, in honour of Breast Cancer Awareness month, and in the past they’ve had a Mary Poppins-inspired afternoon tea.

The Shard is located right about London Bridge station, making it very convenient to get to from other parts of London and from outside the city too. Of course, being located 35 floors up the Shard means there are insane views of London from the restaurant, and makes this the highest afternoon tea in western Europe.

The Shangri-La’s afternoon tea is priced at £62 per person or £72 per person including a glass of Veuve Clicquot Champagne, before service charge.

When ordering a glass of champagne, it took a while as I think they forgot about it! But otherwise, the staff were happy to help with anything that was needed and were very attentive, with each course arriving quite quickly as we were ready for it.

If you prefer the savoury part of afternoon tea over the sweets and pastries, this tea is IT. I had the vegetarian savoury options, which were a blend of Asian and British cuisine, with pieces like a Hoisin sausage Bao and avocado on yuzu Nigiri. There’s also a nice addition of a pandan and coconut “jam” to spread on your scones, which was quite unique and tasted great.

The welcome drink was quite theatrical, using dry ice to make the table look like it was a beautiful floating cloud.

Of course, if you want your afternoon tea with an amazing view of the city, you can’t get do any better than the experience at Ting, it’s unbeatable. This is also a great tea for anyone who likes themed teas over classic ones, and who loves the savoury part of tea, as they knock the savoury treats out the park here.

Find out more about afternoon tea at Ting in the Shangri-La hotel. 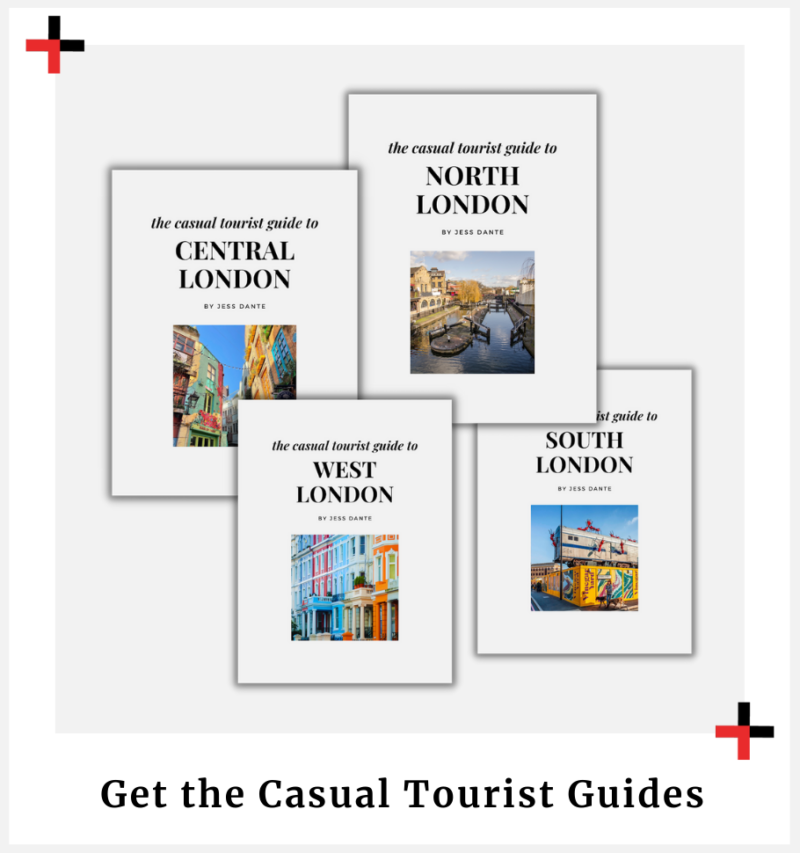 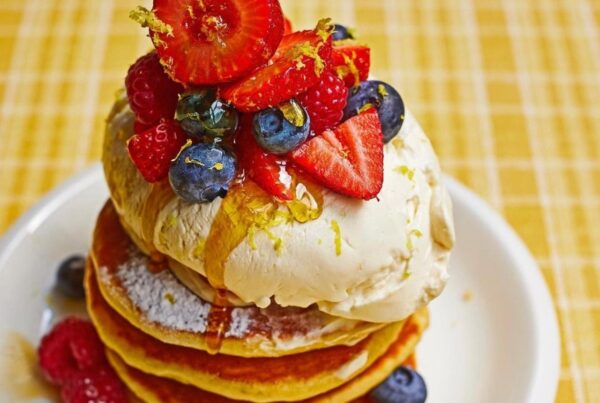 LondonLondon Food and DrinkThings to Do in London
February 18, 2022

The Ultimate Guide to Pancake Day in London 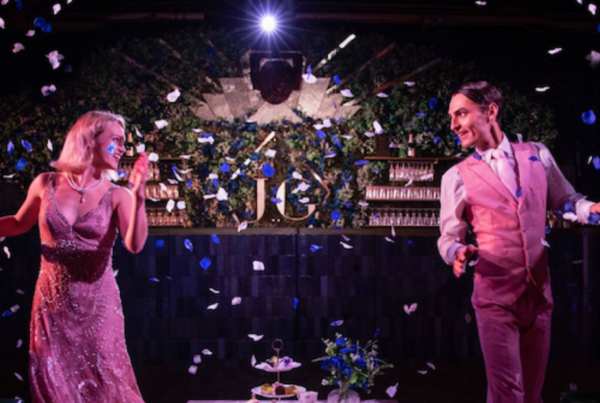 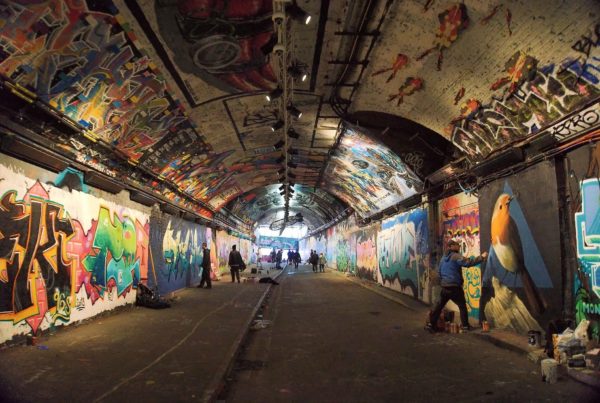 3 Days in LondonLondon Food and DrinkThings to Do in London
January 11, 2022

10 Hidden Gems to See with Three Days in London